For a religion, or ‘school of thought’ as it were, as comparatively young to others as it is, there are as many branches of Satanism as there are shades in an afternoon rainbow. Being built upon a bedrock of individual perception and self-determination this is a—at times unfortunate—necessity. From The Order of Nine Angles to The Church of Satan, each group separates themselves from their siblings by factors big and small, malevolent and benign.  It’s often remarked how these differences, each Satanist’s drive for freedom, personal autonomy and both identity and exodus, make establishing any meaningful grouping akin to “herding cats”.

However, it is interesting to note how, even with a group so staunchly based in individuality, so many points of interest are shared. For example, most of the Satanists I’ve encountered have a keen interest in mythology.  For some this manifests as a vicarious existence carried in the back of their mind, living their daydreams through heroic and carnal exploits. For others, it’s the intellectual pursuit of tracing the various myths and legends to their origins in history and determining their effects upon the psyche of modern society. Others even take to these in some part as genuine beliefs, whether outspoken or not, carrying with them the teachings and iconography of ancient gods and their heroes, Odin, Cucculain, The Morrigan to name a few.  Even the most determined and fiercely atheistic among our number often look to these tales as moral and ethical parables, utilizing the lessons which can be gleaned from them to inform their personal code of ethics and colour their perspective of the world.

Many would point to these myths and legends as the precursors to our modern myths and heroic epics, superheroes and vigilantes. The Old Cultures had Zeus, Bastet, Woten, Hathor and so on. We have Spider-man, The She-hulk, Superman et cetera.  As a people we would seem to feel some need for these tales, these battles fought, lessons learned and larger-than-life mythic figures. Thus we repeat them again and again with new faces and names for each generation. Many authors have offered in-depth studies on this point.

With that in mind I present the mythic tale of Heracles and his legendary labour—the slaying of the Lernaen Hydra.

It is a tale many scholars say predates Christ by a good 700 years in its origins. Over the centuries, it has morphed and changed many times. From Alcaeus to Virgil to The Disney Company, the details have varied, from location of the actual battle to the nature of the beast and its powers. However, keeping to the popularized version, in this story the hydra was supposedly a great serpentine or reptilian beast with numerous heads, each possessing venom so powerful its scent alone was lethal. It’s most dangerous feature however was it’s capacity for regeneration. For each head Heracles managed to sever from the body, two more immediately grew in its place to fight on. With the aid of his nephew, Iolaeus, Heracles managed to sear the wounds made by each decapitation and eventually took the beast apart one head at a time.

As stated, many Satanists draw upon mythology to inform their worldview in a manner arguably similar to many modern christians IF much more self-aware in their appreciation. These stories help them, if even unconsciously to be brave, resolute in the face of seemingly impossible odds against an undying foe.  This appreciation can be a truly profound and positive thing.

This can also on occasion be just as problematic as the appreciation of christian mythology, if we derive the wrong messages from our legends—or at the least, less efficient messages.

As stated, Modern Satanists are an extremely varied lot, with as many perspectives on what “Satanism” is and what it means to be a “Satanist” as there are individuals to be counted. However, like it or not, all branches of Satanism, regardless of what flag they walk under, what code of ethics, if any, they keep, or what store they agree to buy their similarly-themed black clothing and band T-shirts at, we are ALL presented with the same foe. We have our own Hydra, a many-headed beast with fanged smile and insidious venom which comes at us all from every direction it can, utilizing its every bestial advantage to strike us down.

This beast, of course, is organized evangelical religion.

Many Satanists would lash out at the beast on an individual level, striking at each head 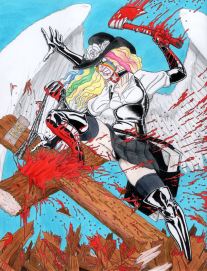 one by one. As they side-step the fangs of Falwell, they strike at the venomous grin of Graham. Each strike is at once confident and true, eventually finding the mark and perhaps even, with the aid of others both in vocal support and legal pressure, they manage to sever these fangs from the beast.

But all too often they forget. They celebrate what is not the totality of victory, only one stroke in an ongoing battle. They have learned to emulate the heroes’ tactics but not to improve upon them.

For every teacher, preacher or politician who forces their personal superstitious beliefs upon the people whom we, as a group, manage to mock, belittle, and expose for the venomous beast that they are, another two will rise. Decapitate George W Bush if you would. His neck will sprout forth Mike Pence and Jason RAPErt. We focus on the heads, not the beast…

To be certain, we must rejoice in our victories against our common foe, the foe of ALL humanity, organized, deliberate ignorance and supplication to arbitrary authority—but we must acknowledge that these “heads” are not our true enemy. They are merely faces, mouthpieces of a much older and larger monster.

As Satanists, if We choose to fight this battle, we must learn from our ancient heroes and gods. We must not simply emulate them.  We must be better.

The Baphomet, Lucifer, Prometheus, these entities walk in the light of intellect and are cursed by tyrants for the “evil” of bringing knowledge to the masses which those same tyrants would see remain stupid—ignorant and fearful herd animals for their control and pleasure. We must learn to fight “smarter, not harder” as it were, and gather our strengths and wits to identify our true foe.  We must work together as Heracles and Iolaeus, but we must also develop new strategies, better techniques to deny the crushing bite of their fangs, avoid the numbing venom of our oppressors, and strike them down.

Heracles’ twelve labours were fought for reasons of his shame and pride.

Ours are fought for much greater prize—

The freedom of our minds and our hearts and the same rights and responsibilities for those we would love, our children.

This is a battle which you may choose to not take part in, but it will happen regardless. If you would take up the sword, do so with a learned mind.

And do NOT do so alone, Heracles.

No Gods and No Masters. One World and One Love for us all.